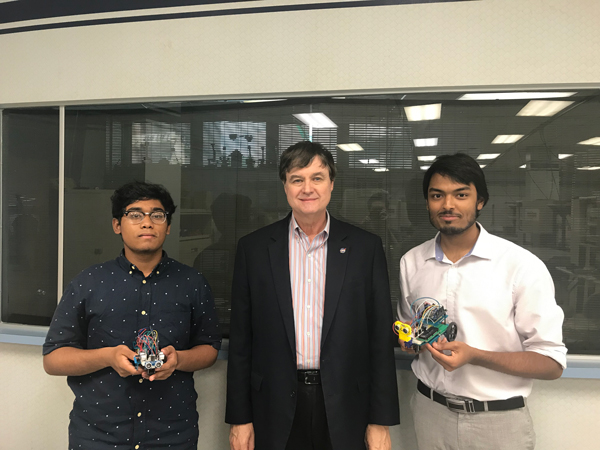 Students Koshiq Hossain (left) and Meah Ahmed (right) participated in the NASA-GISS Summer program for Scientists and Engineers which is part of a larger program of 25 teams at The Goddard institute for Space Studies College symposium.  In summer 2019 the team of two, led by Professor Joseph S. Miles (center) and Dean Siva Thangam created an autonomous and collaborative robot over the course of a six to eight-week period.  The robot’s mission was to explore a Martian Lava Tube.

Recent discoveries of cave like openings, theorized to be remnants of lava tubes—images of which were taken by the Mars Reconnaissance Orbiter— significantly increases the prospect of establishing a Martian Colony.  Lava tubes are volcanic caves formed from solidified lava. Because of the low gravity conditions found on Mars, Martian lava tubes are enormous enough to accommodate a small city; there is evidence that some Martian lava tubes are 820 feet wide. Also, their environment is shielded from cosmic radiation and micrometeorite flux. They therefore could potentially serve as a safe habitat for future human missions. Paradoxically, certain conditions currently prevent, these possibly water containing extra-terrestrial dwellings, from serving as a haven for human astronauts. Safety considerations, coupled with economic factors, and the tubes low visibility from orbit, require that scientists and engineers first rely on robotic explorers.